Patent Pending ALTIUS Performance-Tinted Contact Lenses have been developed to eliminate visual distractions such as lighting glare while elevating critical visual details, such as visual clarity and contrast, to optimize performance. ALTIUS Performance-Tints have been developed through years of clinical research and testing with elite athletes around the world. See ALTIUS research results and references here.

Visible light includes all colors of the spectrum that we can see, going in order from violet to blue, green, yellow, orange, and finally red. Those colors are shown across the top of the graphs. 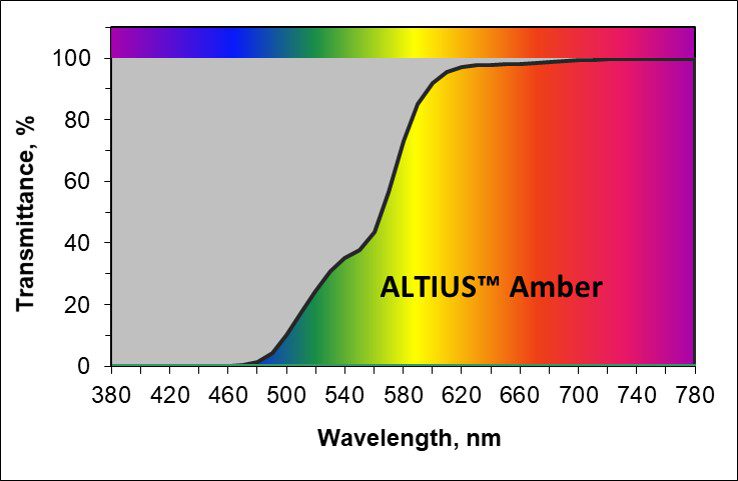 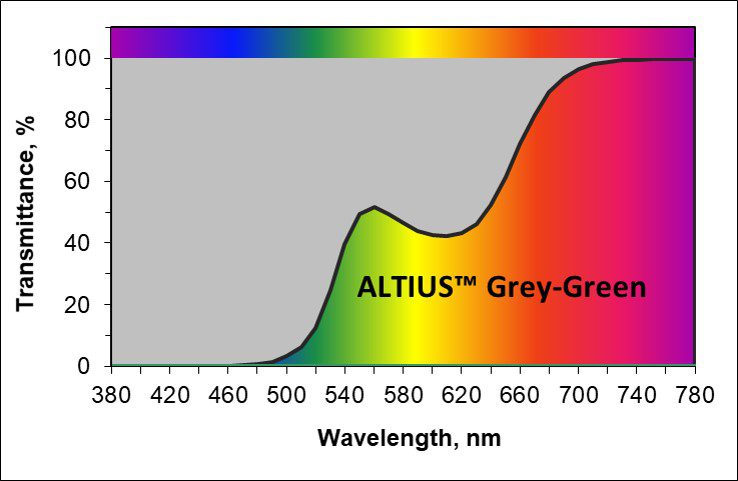 Each individual color can be defined by its wavelength, usually measured in very small units of length called nanometers (nm). Visible light ranges in wavelength from about 380 nm (corresponding to the color violet) to about 780 nm (corresponding to the color red). These values are shown at the bottom of the graph. The peak sensitivity of the human eye in daylight is to a wavelength of about 555 nm, which will appear greenish-yellow in color.

Transmittance is the percentage of light of a particular wavelength that passes through a lens. Transmittance can range from 0%, in which the lens blocks all of that wavelength, to 100%, in which the lens allows through all of that wavelength. These values are shown on the left side of the spectral transmission graphs. The curve on the graph shows how the transmittance changes for each wavelength with ALTIUS™ Amber and Grey-Green. For example, at the specific wavelength of 555nm, ALTIUS™ Amber transmits about 40% of the light and ALTIUS™ Grey-Green transmits about 50% of the light.

ALTIUS™ Amber and Grey-Green protect the eye by blocking harmful ultraviolet (UV) rays, which have wavelengths less than 380 nm (not shown on the graph).

Chromatic Abberation With NO Tint

While blocking many of the wavelengths between 380 nm and 500 nm with ALTIUS™ Amber and Grey-Green can cause some violet and blue objects to appear darker or even black, this has the benefits of simultaneously providing a comfortable perceived “Brightening Effect” of the environment, while reducing C.A. and, therefore, reducing what wearers perceive as “visual noise” in the environment. As a result, glare will be reduced, contrast will appear to be improved, and overall vision will appear sharper.